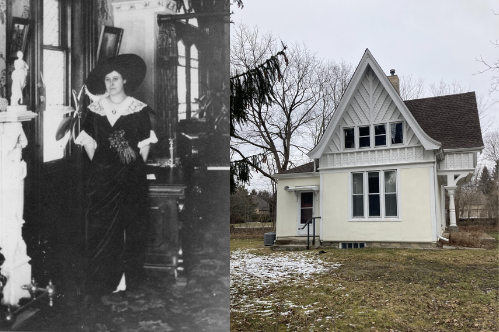 Elsie Perrin Williams was a creative soul. While she had many interests, such as golfing, she was clearly interested in art.

From paintings, such as the one pictured below, to even designing the gatehouse at Windermere, she had a natural talent.

She was also an avid reader. The Estate boasts a collection of interesting and uncommon books with a plethora of ephemera and markings from the lady herself.

Things like golf scores and lists are often found tucked away in books such as the 1757 printing of The Spectator, or Victor Hugo’s Les Misérables.

While reading and painting hardly made Elsie an anomaly for the late 1800s and early 1900s, the fact that she had time for all of it does.

It was uncommon for women not to have children. While she might have been unable to have them, adoption would have been an option that she may have been open to, as it is rumoured that she was adopted herself!

Elsie married Henry Thomas Hadley Williams in 1905 and received the deed to Windermere as a wedding gift. To put this in context, women only started being allowed to own property in 1884, just twenty-one years prior.

Another oddity is that she was 27 when she married. Women in Canada at the time were, on average, 21 to 22 when they married. By the consensus du jour, she was approaching spinster age.

Hadley went to England to work as a surgeon during World War I and Elsie accompanied him.

There are many quirks to Elsie’s personality that come across in newspaper clippings and artifacts found in the Estate.

For example, Elsie drove cars. She would drive her husband Hadley to work and wait for him. Seeing as how he worked as a medical professor at Western University, you can’t fault them for not wanting to deal with parking!

Elsie seemed to have had a keen interest in Japanese culture. Among other things, silk screens, teacups, and door knockers all seeming to have come from Japan appear in the Estate’s attic.

More interestingly, though, is the sword, pictured above. It takes the style of the katana, but is much lighter and shorter. Likely meant to be displayed rather than used in martial arts practice, it is very blunt but well-preserved.

While it is unlikely Elsie ever visited Japan, as the journey would have been incredibly long, she might have wanted to, as a guidebook with common Japanese phrases can be found among her things.

Elsie’s history is fascinating. Her interests and can-do attitude set her apart from other women of her time, which makes her a valuable historical figure for future study.

For more information on the heiress, copies of Elsie’s Estate: The Life, Love, and Legacy of Elsie Perrin Williams can be purchased through the Heritage London Foundation.

More About Our London Heritage