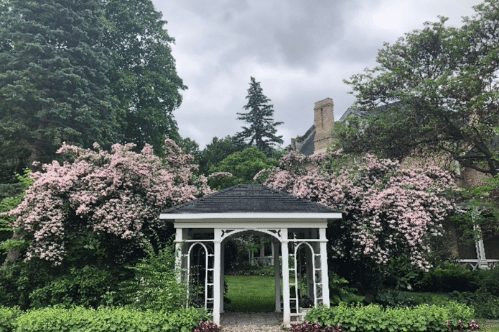 Those of you who follow the progress of Heritage London Foundation and have received our newsletters over the years will be aware that the grounds at Grosvenor Lodge present a unique challenge.

Heritage London Foundation has to maintain them with a minuscule budget despite the fact that the City owns the house and a small parcel of land surrounding it. The wider area is owned by Western University, and a good deal of cooperation over the years has ensured a smooth-running partnership regarding maintenance of the Western-owned lawns.

This blog post is intended to provide a bit of history about the evolution of our grounds maintenance since the millennium and then will, from time to time, focus on different areas of the grounds and some projects we will undertake in the near future to enhance and upgrade the landscape.

Our goal is to make the Lodge grounds a showpiece and a must-visit destination for Londoners and visitors alike.

While large projects were undertaken with grant money, such as the Millennium Project in 2000 which saw a considerable amount of redesign by Parterre with several new structures and plantings, Heritage London Foundation has lacked the personnel and funds to do more than the absolute minimum amount of maintenance.

Volunteers provided most of the garden maintenance for many years, with the grounds-keeping budget going towards essential lawn maintenance and the purchase of annual plants.

For eleven years, local artist Ron Benner designed and maintained a magnificent installation that included a riot of colourful annuals in what was then known as the Kitchen Garden, as well in the long bed just outside it. With a large board listing hundreds of native species displayed above it, the project was educational as well as artistic.

Ron designed, planted, weeded, and watered the central formal beds each year. His art piece featured plants from the American Continent (and included a wonderful series of black and white photographs which were surrounded by plantings of Indian corn and other types). The project was called All That Has Value and Ron has produced a book in several different locations in Canada that features the creation of the garden installations.

You can learn more about the book and his work on Ron’s website.

His skill at growing morning glories was spectacular and they were always a feature of the summer gardens.  Over the years, Ron discovered which plants were happiest in the Lodge environment and developed a list of annuals that the resident critters would leave in peace!

About halfway through Ron’s time at the Lodge, volunteer gardener and former Heritage London Foundation president Susan Bentley got involved and started to tackle some of the beds around the edge of the central area which had become a bit overgrown.

Continue to Part Two: The Evolution of the Kitchen Garden