Grosvenor Lodge Gardens Part 2: The Evolution of the Kitchen Garden 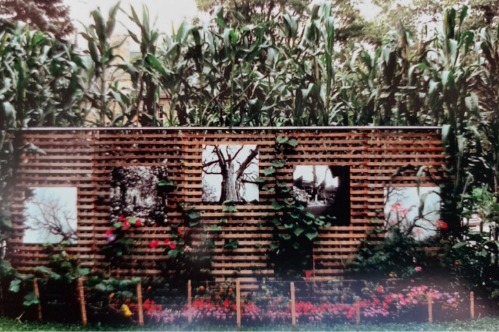 As mentioned in Part 1 of this series, the kitchen garden seen in place today was installed as a millennium project. In 2000, grant money was given by the Trillium Foundation, London Community Foundation, and the Richard and Beryl Ivey Fund. The new garden was designed by Sylvia Behr and Parterre as a “potager.”

What is a “Potager” garden?

This formal type of vegetable garden (providing the ingredients for the daily “potage” or soup) started in medieval monasteries and was perfected by French gardeners in the 17th century.

Since then, it has evolved to become a garden valued for its decorative beauty as well as nourishing elements.

As Grosvenor Lodge then functioned as a Centre for Heritage and the Environment, the idea was to make the maintenance of the vegetable garden a shared demonstration project of the groups who were based at the Lodge. Any produce grown was also to be shared by the group members.

Several environmental groups had offices there in those days. Over the years, some of the groups moved on as Government funding dwindled or volunteers became scarce, and the Lodge had fewer and fewer people to work in the gardens.

The Fairy Godfather of the Kitchen Garden

As all gardeners know, it only takes a couple of years for a well-maintained garden to become a weedy jungle if it is left to its own device (especially in Southwestern Ontario where our climate seems to produce rampantly  vigorous spring and early summer growth.)

The “potager” kitchen garden needed a fairy godfather, and one appeared in the form of local artist Ron Benner.

As you will recall from Part 1, from 2004 – 2015 Ron designed and maintained a magnificent three-part art installation (All That Has Value) that included a kaleidoscope of annuals formally bedded in the kitchen garden’s central beds.  He used university students as his volunteer helpers each year. Ron also planted annuals in other places to give the Lodge grounds a hit of summer colour.

Heritage London Foundation was very grateful for Ron’s help; we also remember that Van Horik’s nursery used to make a generous contribution each year by supplying the annuals at cost.

I joined the Board of HLF in 2005 and started to volunteer in the grounds pretty soon after that. A fellow Board member, Diana Coates, used to help out from time to time as well, and in 2008 she donated a wonderful selection of large hostas.

Later, Diana also gave a section of wrought iron fencing which she and I agreed would help to formalize the kitchen garden. Great excitement ensued when the excavation for the fence posts struck the gas main and we had six fire trucks scream down the driveway. It was fixed very quickly but we had a scary few hours – we had called for all the required locates, but the gas line was overlooked!

The fence is handsome and we planted a row of cedars behind it to screen the compost bins from the kitchen garden.

We then tackled the weed infested area under the large trees on the northern edge of the potager and replanted it with periwinkle. To this day with the tree seedlings pulled out on a regular basis, it does look at least respectable. The flowering currant shrubs which surrounded the garden have marched ever forward towards the central beds and still need to be cut back each season.

In 2012 we turned our attention to a large bed just inside the kitchen garden that had become somewhat overgrown.  Karl Van Horik helped with a design and Union Gas sent their Helping Hands Team to lend some manpower.  They also gave us a grant to help with the cost of new plants.

We dug out all the old hedge shrubs and completely redesigned and replanted this bed. We were able to retain the lovely pale yellow irises and some of the lambs ears (Stachys Lanata), but other than that we were starting from scratch.

As Karl had chosen lavender as one of his plants, this gave me the idea for future infill planting to make it an herb bed in keeping with the idea of the potager.

It is now filled (to the brim) with herbs such as oregano, thyme, chives, and lavender as well as some tall perennials such as blue Siberian Iris, which bloom in late spring.

The Baptisia Australis has really thrived and is now enormous; its lovely blue flowers are an early summer glory, and we also have some light pink perennial cranesbill to fill out the garden.

To try and return to a more formal scheme, we planted some yews and a hydrangea in the flower bed next to the house along with a row of Bridal Wreath Spiraea (a beloved mainstay of local vintage gardens) along the shed wall.

As mentioned before, things grow fast here in London, Ontario. These beds already need thinning and tidying even though they were only planted 8 years ago.

Later in this Grosvenor Lodge Gardens Series, I will discuss the transformation of the Kitchen Garden into the Wedding Garden. Stay tuned for Part 3 coming soon!