The Victorian Veer to Verandahs: The Grosvenor Lodge Restorations 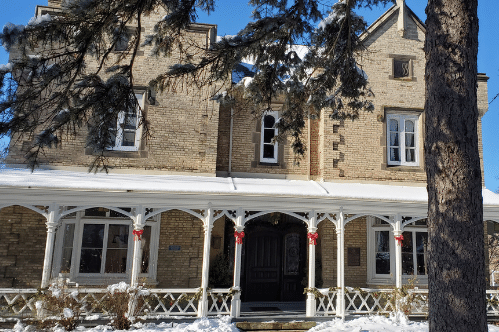 The verandah, like many fancies of the British upper echelons, entered through European exploration of India. While European (especially Portuguese) explorers had reached India long before the rise in popularity of verandahs, they became popular in Australia, the United Kingdom, and North America in the mid-1800s.

The word is believed to have come from the Hindi word verandah, but also has a similarity in the Portuguese baranda and barandilla, all three meaning a roofed outdoor space.

It was thanks to the Victorian style of filigree (think wooden lacework) that gives us the iconic look that many associate with the quintessential verandah associated with old houses like Grosvenor Lodge. Filigree can be as detailed or as simple as the maker likes, and is usually found lining the top of the structure or diagonal against columns, similar to a frieze.

The Victorian era typically saw use of materials such as limestone and wood, and later in the period, red brick. Verandahs and porches were typically constructed out of wood such as pine or oak with the roofs made of tar and coal over a frame. Higher class homes would sometimes also use slate, but this was costly.

While we often think of Victorian as a particular architectural style, it is actually a collection of styles such as Italianate, Romanesque, or most commonly, Gothic Revival. Grosvenor Lodge falls under the category of Gothic Revival.

Verandahs were originally designed to be a heightened spot for landowners to observe work being done on their farms, but eventually became social hubs for teas, brunches, and oh-so-popular garden parties. While the mix of outdoor breezes and a roof once used to be perfect for maintaining the comfort of attendees, the setup is now ideal for responsible and safe get togethers during Covid-19.

The work on our verandah at Grosvenor Lodge was done by Maximum Carpentry Inc, a company that does both commercial and residential contracts for design, building, and project management. They have a lot of experience with heritage buildings and historical architecture, having undertaken projects such as window and porch restoration, stairs, masonry, and even slate roofing.

The restoration of the Lodge’s verandah was a large undertaking: